Opps I found this in my notebook and realised that I had not posted it! In the AC there are three sacred space projects, the first part was to clear out any unwanted stuff. I find this hard to do as I always think “that will come in handy one day”. I also buy art equipment whenever I get the chance! It wouldn’t matter so much if I was prolific at creating artworks but I’m not. I have loads of paint and now I have finally found my favourite brand the others don’t get a look in and don’t ever get used.  I have a box of paper that never gets used because it is too nice…although after realising that was why I never use it, it is now going to get used. I have a box of bits and pieces that looks as if the bin has been emptied into it but this is all my textures that I use for monoprinting. These scraps get used all the time and my all time favourite piece is the cardboard sheaf that is used to protect your hand when carrying a cup of tea, it is from ‘Prêt Mange’. I also love fruit nets! 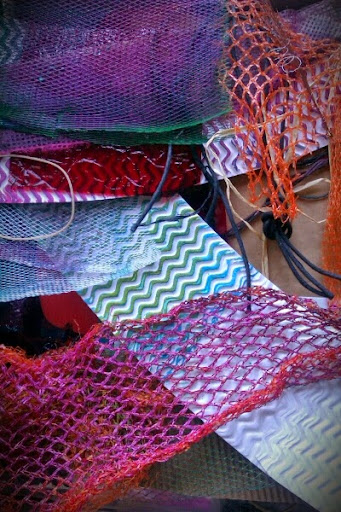 Books are another problem…I have some that I haven’t looked at since we moved back to London (3.5 years ago) but when I pick them up to give away I can’t. I did manage to get rid of some that I had never used or not looked at in ten years. These went off to the charity shop. I never keep any novels as I know I will never read the same one twice and the ones I normally buy were purchased from a charity shop anyway!
All in all I found this quite difficult, it was suggested that we did a foot a day. I did sort though my stuff and ended up with more than a box full to give to charity. I also think this is going to be an ongoing thing because some days it is easier than others. I also need to be mindful of what I bring into our flat, as we don’t have much room.Follow my blog with Bloglovin

Where to find me